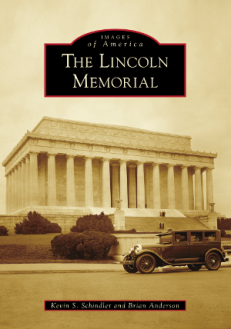 By Kevin Schindler and Brian Anderson

The Lincoln Memorial in Washington, DC, is a monument to the nation’s 16th president, a commemoration of the country’s post–Civil War reunification, and a setting for national events and quiet visits. Demands for a national memorial to Abraham Lincoln began shortly after his 1865 assassination but produced nothing substantial until the early 20th century. Elevation of Lincoln to legendary status and an extended debate over location and design finally led Congress in 1913 to approve a memorial at the west end of the National Mall. Construction took another eight years. Since its dedication in 1922, the Lincoln Memorial has hosted civil rights demonstrations, presidential events, national celebrations, and day and night visits by millions of people who come to reflect upon one of the most consequential leaders in American history. 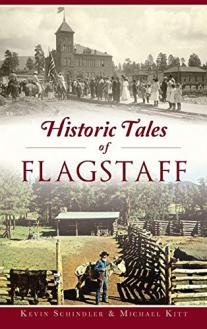 By Kevin Schindler and Michael Kitt

Flagstaff, Arizona, was originally settled in the 1870s as a railroad and lumber town on the southwestern edge of the Colorado Plateau, amid the ponderosa pines. Now most noted for its proximity to the Grand Canyon, the city offers a tantalizing combination of history and progress. Theodore Roosevelt, the Apollo astronauts, Walt Disney filmmakers, Navajo code talkers and Pluto-discoverer Clyde Tombaugh all feature in the area's fascinating past. Join authors Kevin Schindler and Michael Kitt as they relate the trials and triumphs that have given this town its charm, from the tumultuous days of the Wild West to the fast-paced twentieth century. 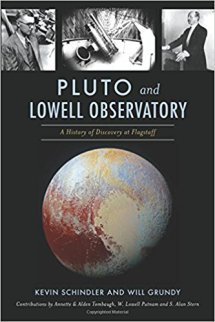 Pluto and Lowell Observatory: A History of Discovery at Flagstaff

By Kevin Schindler and Will Grundy

Purchase at Arcadia Publishing  or Amazon, or email me to purchase a signed copy

Pluto looms large in Flagstaff, where residents and businesses alike take pride in their community's most enduring claim to fame: Clyde Tombaugh's 1930 discovery of Pluto at Lowell Observatory. Percival Lowell began searching for his theoretical "Planet X" in 1905, and Tombaugh's "eureka!" experience brought worldwide attention to the city and observatory. Ever since, area scientists have played leading roles in virtually every major Pluto-related discovery, from unknown moons to the existence of an atmosphere and the innovations of the New Horizons spacecraft. Lowell historian Kevin Schindler and astronomer Will Grundy guide you through the story of Pluto from postulation to exploration. 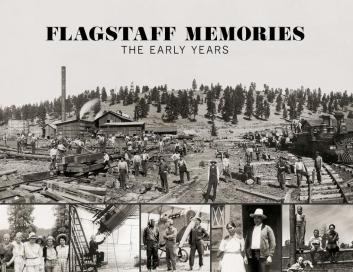 By The Arizona Daily Sun

This beautiful heirloom-quality book features a glimpse of Flagstaff from the early years to 1939 through stunning historic photos. The Arizona Daily Sun is thrilled to include photos from their readers, in addition to photos carefully selected from The Museum of Northern Arizona and Lowell Observatory. 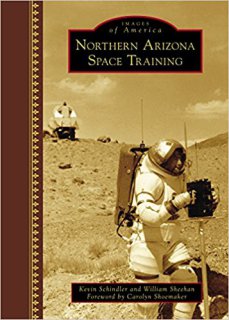 By Kevin Schindler and Bill Sheehan

Purchase at Arcadia Publishing or Amazon, or email me to puchase a signed copy

During the 1960s and early 1970s, northern Arizona played a critical role in fulfilling President Kennedy's bold challenge of sending humans to the moon. From the rocky depths of the Grand Canyon to lofty cosmic views from Flagstaff's dark skies, northern Arizona was ideal for activities ranging from moon buggy testing and geology training to lunar mapping and mission simulation. Every astronaut who walked on the moon, from Neil Armstrong to Gene Cernan, prepared for his journey in northern Arizona, and all used maps created by Flagstaff artists to navigate their way around the lunar surface. This book captures the spirit of these pioneers with stunning images from NASA, the US Geological Survey, and others. 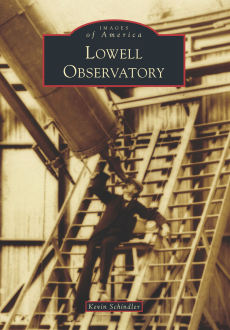 Atop a mesa one mile west of downtown Flagstaff, Arizona, sits Lowell Observatory, an astronomical research facility steeped in tradition. Percival Lowell, scion of a Boston Brahmin family, initially established his observatory in 1894 to study the possibility of intelligent life on Mars. Lowell widely popularized his controversial theories, sparking debate among both the scientific community and lay public. In the following years, the observatory's astronomers made several discoveries that dramatically altered our understanding of space, including Clyde Tombaugh's discovery of Pluto in 1930 and V.M. Slipher's detection of the expanding nature of the universe in 1912. Decades later, Apollo astronauts visited as part of their training to fly to the moon. These stories and others offer a glimpse of the scientific discovery, community pride, and personal triumph that define Lowell Observatory. 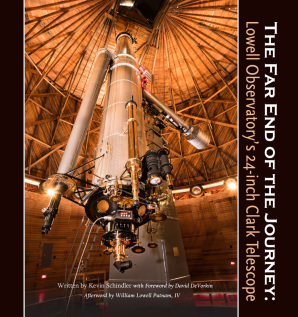 Email me to purchase a copy

Lowell Observatory's Clark Telescope is one of the most storied telescopes in the world. Commissioned in 1896 by Percival Lowell for his controversial studies of Mars, the telescope served as V.M. Slipher's workhorse in obtaining early evidence of the expanding nature of the universe. In the 1960s, artists and scientists used the Clark to create detailed lunar maps in anticipation of the Apollo missions to the moon. This coffee table book covers the significant and charming history of this telescope, from its quirky construction and this legacy of groundbreaking research, to famous visitors and educational programs by the likes of Walt Disney Productions, Carl Sagan, and Bill Nye the Science Guy. The final chapter covers the telescope's recent breathtaking renovation. 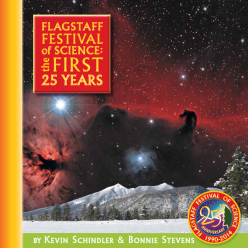 By Kevin Schindler and Bonnie Stevens

From the Preface: The story of the Flagstaff Festival of Science is as rich as the subject it celebrates.  We intend this book to capture the spirit and significance of this annual event while recalling the unique circumstances that make it possible. We have included a yearly listing of themes, keynote speakers, program titles, host sites, sponsors, and board members (starting with the first board in 1992).